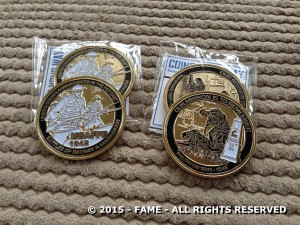 Robert Hudson has worked with artist and designer Mher Sayan of Orani, Bataan to create a beautiful “Challenge Coin”. Historically, these coins were used by people in the military to show their respect when meeting a fellow soldier. Each coin was designed to reflect something unique about the unit the soldier was in. These coins were treasured by the soldiers, along with the stories each coin told.

Now, FAME has their own challenge coin. Artist Mher Sayan has captured the essence of the Bataan Death March in Bataan with his artwork. One side of the coin captures soldier wearing the uniforms used during the early period of the Battle of Bataan and the words “United States Armed Forces in the Far East” and “Battles of Bataan & Corregidor”, as well as “USAFFE” and “1942, the year Bataan fell.

On the reverse of the coin, is the FAME motto “Our Mission To Remember”, as well as a map of the Death March routes from Bagac and Mariveles to Capas/Tarlac. Adding additional impact to this image is the iconic silhouette of a fallen Death March soldier being aided by his fellow soldier, and a gleaming white Death March marker.

The detail captured on this 2″ polished bronze coin is incredible.

These coins are only available through donations to FAME. Please see our donation page for more information. Click here to go to the Donation page.