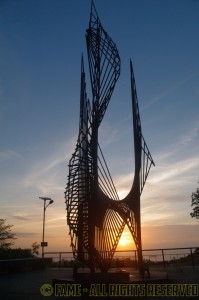 From AmCham Journal, April 2005, by permission

Corregidor Island, the Fortress of Freedom, remains a prime tourist destination, especially so this year – the 60th anniversary of the end of WWII.

Daily tours traverse the island following the routes of the original roads and train tracks, with tourist riding in replicas of the old tramvias (streetcars) that carried passengers during its heyday as Fort Mills – the guardian of Manila Bay. Visitors are taken through the historic section of the island to view the massive gun batteries; the ruins of the old troop barracks and most poignant, the towering facade and shell of the Cine Corregidor – where the men and women of the Fort watched “Gone with the Wind” before the winds of war struck and the island became a fierce battleground.

The story of Corregidor – her battle to hold off the Japanese war machine with outdated and insufficient arms with little food or medicine to combat injuries, and the tropical diseases that ran rampant, and the incredible morale of her defenders – has been told in great detail elsewhere.

The battle to hold Corregidor was won with great loss of life – and the island stands today as a memorial to those who fought so very hard for freedom. Among the memorials on the island is the Monument of the Eternal Flame, a large steel sculpture, symbolizing the Flame of Freedom. (See box below for information on the sculptor Aristides Burton Demetrios and his other projects – Ed.)

Despite the original provision for floodlighting of the monument when it was built in 1968, this feature was never implemented due to budget constraints. But, as dusk fell on the evening of March 1, 2005 – the eve of the 60th anniversary of General MacArthur’s return to the liberated island – a small group gathered at the base of this imposing memorial to witness the culmination of a long-held desire to see that “flame” fulfill its intent — “burning eternally in commemoration of the heroic struggle by the US and Philippines to preserve freedom for future generations.” (The word is perhaps little understood by those who have never lost it… but to those who have, freedom is more than a word.) 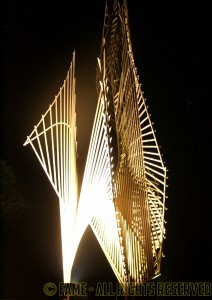 The Eternal Flame is lit!

That evening the Eternal Flame was set “alight” through the modern miracle of solar power, thanks to the generous support of chamber members, Mr. Don Mika and Mr. Greg Reichow who saw the great symbolism in this project and got the wholehearted support of their US-based head offices to undertake the project. They took the lead and formed a project team that included not only their companies, SunPower Philippines Manufacturing and Cypress Semiconductor Corp. (NYSE: CY), but also U-Freight and the LGC group as well as the Department of Energy, under Sec. Peter Abaya and Director Teresita Borra, who also recognized the significance of this project.

Greg Reichow and Leslie Murray, representing Filipino-American Memorial Endowment, Inc. (F.A.M.E.) threw the switch, witnessed by Lt. Col. Artemio Matibag of Corregidor Foundation, Inc. (CFI) and F.A.M.E.; Paul O’Friel, First Secretary of the US embassy; Group Captain Robert Bailey Defense Attaché of the British embassy; and Mrs. Valerie Bailey; Group Captain Jim McMillen, Defense Attaché of the Australian embassy, and Mrs. Sue McMillen, as well as the engineers and project managers of Solar Electric Company and many of the CPI staff who had devoted much time and work to the project.

The memorial is now ablaze with light from dusk to dawn, and the word has gone out to WWII veterans, former P.O.W’s, civilian internees and survivors of the Philippine battles of WWII that indeed the Flame of Freedom on Corregidor does now burn “eternally” — at last!

Aristides Burton Demetrios, also known as “Ari,” was born in 1932 and raised in Massachusetts, where he lived during childhood in Gloucester. His father George Demetrios was a classical sculptor, trained by Bourdelle, a student of Auguste Rodin. His mother Virginia Lee Burton was the renowned author and illustrator of children’s books, including Mike Mulligan and His Steam Shovel, and The Little House, for which she won the prestigious Caldecott Medal. She was also a textile designer, founding the Folly Cove cooperative. After graduating from Harvard College in 1953, Ari Demetrios served as an officer for three years in the US Navy. He studied art and sculpture at the George Demetrios School from 1956 to 1959. He studied at the University of California School of Architecture, in 1959.[2] In 1963, Demetrios won his first national sculpture competition, when his proposed design was selected for a major fountain commission on the campus of Stanford University (The White Memorial Fountain: “Mem Claw” ).[3] Soon after, he was chosen for a public art commission in Sacramento in front of the County Courthouse. Next, he was selected by David and Lucille Packard to design and fabricate a sculpture for the entry to the Monterey Bay Aquarium(Forms Sung In A Kelp Forest). Demetrios lives in Santa Ynez, California. Career[edit] Wind Harp(1967), South San Francisco Demetrios successfully completed several monumental public sculptures, including Wind Harp (1967) in South San Francisco; Flame of Freedom, the Bataan War Memorial on the island of Corregidor… For more information, may we recommend his website — http://www.demetriossculpture.com