From the September, 2015 AmCham Journal. Used by permission. 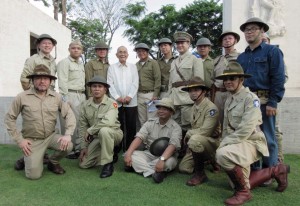 Members of the Philippine Scouts Heritage Society with Col. Jaime Guerrero of the 88th Field Artillery who served in the Battle of Bataan, 1942

At 3:30 in the afternoon, on Sunday, August 16, The Philippine Scouts Heritage Society (PSHS), Fort Mc Kinley Chapter, held a wreath-laying ceremony to commemorate the 70th Anniversary of VJ Day and the end of the Second World War at the Manila American Cemetery and Memorial, host of the commemoration.

Re-enactors, dressed in uniforms of the US Army Philippine Scouts and Philippine Army of World War II era, served as an Honor Guards and Wreath Escorts for the four wreaths donated by the Battlin’ Bastards of Bataan, The Filipino- American Memorial Endowment (affiliate of the American Chamber of Commerce of the Philippines), The American Battle Monuments Commission and The Philippine Scouts Heritage Society.

The event began with the Manila American Cemetery Chapel Carillon playing the Philippine and American National Anthems; a most unusual rendition of the anthems, rarely enjoyed. A short invocation was read by PSHS member Mr. Mario Gregorio Aglipay. This was followed by Welcome Remarks from PSHS Mc Kinley Chapter President, Mr. Jojo Dy wearing a Commonwealth Class A uniform. Bagpiper Roy Espiritu, in Scottish dress kilt, piped “Amazing Grace” as the wreaths of the were laid at the foot of the Chapel by the wreath escorts, as the donors were recognized. 34 Wreaths were offered by the Philippine Scouts Heritage Society, the American Battle Monuments Commission, The Filipino- American Memorial Endowment and the Battlin’ Bastards of Baatan. 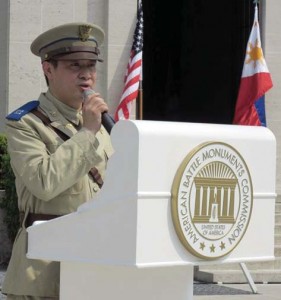 The keynote speaker was former Senator Ramon “Jun” Magsaysay Jr. who delivered an eloquent and impassionate talk on the cost of war and the lessons we must learn from it. 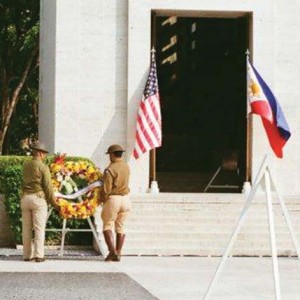 His speech was followed by Philippine Scout WWII veteran, Colonel Jaime Guerrero of the 88th field Artillery (PS) who served as a forward observer at the Battle of Bataan.

Mr. Carl Burge and Mr. John Gilbert and associates of the VFW, Post 2485, Clark were in attendance. The POW/MIA Project Group from Bataan was also present, led by Mr. Robert Hudson. Mr. James Litton, Philippine representative of the Battlin’ Bastards of Bataan made it, despite a recent illness. Ms Leslie Murray attended, representing F.A.M.E which contributed to the services of the Piper and helped circulating the notice of the commemoration throughout the community.

The PSHS would like to thank all who contributed to this historic, 70th anniversary event with their presence and their assistance. We make special mention of Manila American Cemetery Superintendent, Larry Adkison, and Assistant Superintendent, Hubert Caloud, whose joint assistance made this event possible. 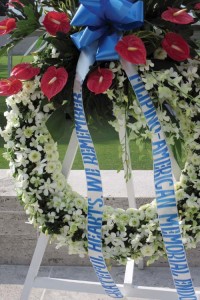 Wreath of the Filipino-American Memorial Endowment