Yesterday, Rosalie and I made a trip to Angeles City to have lunch with a good friend, Robert Lucke. Our trip was also to scout the Death March Markers between Dinalupihan, Bataan and the Train Station in San Fernando where the longest leg of the Death March ended. We plan on cleaning and painting them beginning next month.

Most are in bad shape. #92 in Guagua has had its base partially destroyed by a vehicle strike. No picture was possible as the traffic was terrible and there was a lack of a place to pull over to take a photo.

On the way up through Bataan we passed marker #67 in the city of Hermosa where the National Road and the Bataan Roman Hiway coincide.

The photo below shows what we found. A number of markers have been displaced and damaged by road widening. FAME (Filipino American Memorial Endowment) has been advised. The marker will have to be reconstructed in a new area. 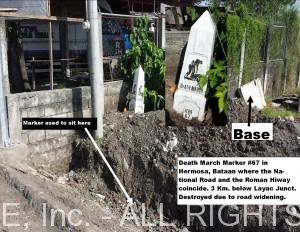 If you are so inclined needs donations. Replacing 2 Death March marker bases will cost about $400 or 18,000 pesos.

Please consider making a donation or purchasing one of the new  WWII veteran recognition and memorial coins, also pictured below at
https://www.filipino-americanmemorials.org/donate/ or Click here to donate